Maybe you’ve heard the incredible story of Saroo Brierley, an Indian man who, as a five-year-old, was separated from his family during a cross-country train trip. Unable to locate his parents, Saroo became an orphan and was later adopted by an Australian family. As an adult, Saroo spent hours poring over Google Earth and Google Maps, trying to identify the few scattered landmarks he remembered from his youth. He eventually succeeded in locating his Indian hometown and family, and later recounted the joyous story in an autobiography that was adapted for a 2016 film, Lion.

The story captures two compelling emotions that are universally relatable in the human experience: the sorrows of a mother who lost her child, and the joyful reunion of family after an interminable separation. Any parent feels an instant pang even at the suggestion of losing a child in this way. But the poignancy of Brierley’s narrative is precisely why I’d like to pair it with a seemingly inane question:

How did Google measure this experience?

Who was Saroo Brierley, in Google’s eyes? Probably an Australian with a name, email address, and IP address. He was a transaction log of Google Earth engagement: 2 hours logged on Wednesday, 1 hour logged on Thursday. And, most importantly, he was an engaged user. He logged in to the service for long periods of time over consecutive days and weeks, so he clearly found value in the product as a happy user.

But wasn’t Brierley’s engagement so much MORE than that? Forget the clicks, logins, and minutes of duration; his experience was truly remarkable. How do we measure THAT?

What is The Mission?

Saroo Brierley’s story, along with many others, illustrates how our expansive networks of information and technology can have meaningful impact for just one individual. And companies themselves claim to have this sort of meaningful focus, too. For example, consider the mission statements of some top tech companies: 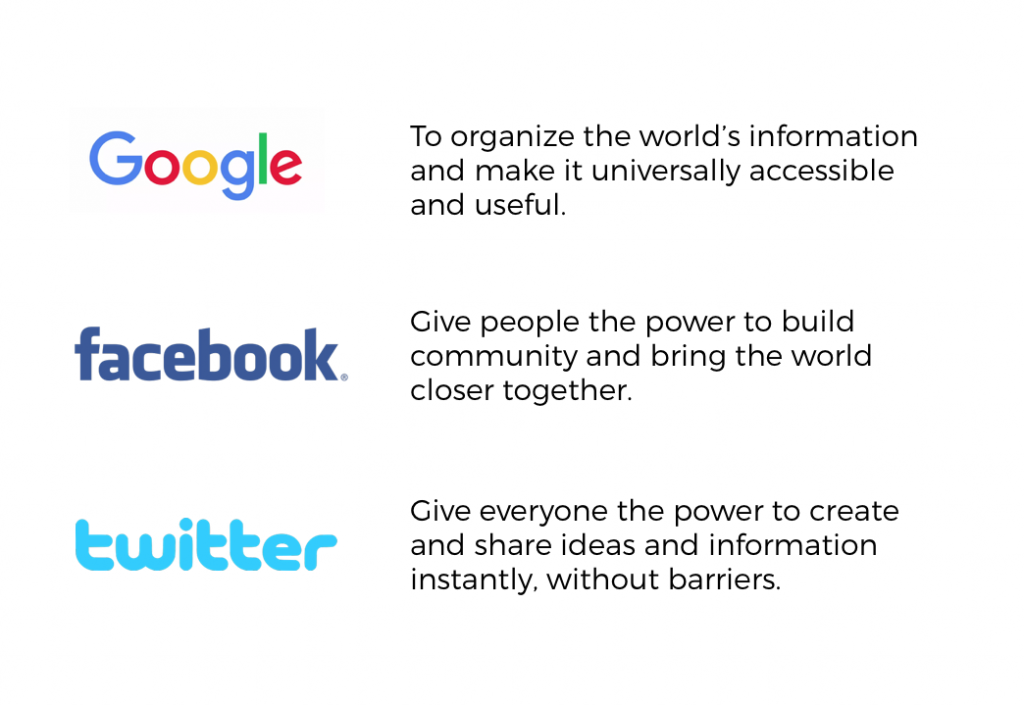 But how do companies measure mission? Every successful company tracks key business metrics on a daily basis. Above all, we track revenue and expenses. From there, we track hundreds of downline metrics, each with its own acronym — DAU (daily active users), MAU (monthly active users), CAC (customer acquisition cost), LTV (lifetime value of a customer), and many other KPIs — most of which are intended to either increase revenue or decrease expenses. We must track these metrics, because we need to sustain the business. With so many metrics, however, few are dedicated to tracking the company mission directly.

We need to improve the ways we track mission metrics.

Our companies track everything but the most important thing…

Let’s take a closer look at Twitter’s mission, “Give everyone the power to create and share ideas and information instantly, without barriers.”

If we set the traditional metrics aside, how would we evaluate Twitter against its own mission? First we could measure users—Twitter has 330 million monthly active users—an important stat because Twitter wants to reach “everyone.” Not only is that a large number of users, but Twitter’s influence also expands beyond users alone, so the platform seems to perform well on reach.

The problem I see, however, is Twitter’s capacity to enable users to “create and share ideas.” Some people create and share ideas, but many Twitter users simple consume passively. It’s difficult to find exact data for the percentage of users who Tweet regularly, but here are some estimates. In 2009, research showed that 90% of Tweets came from just 10% of users. In 2013, a report stated that of users who had Tweeted, only 23% Tweeted in the most recent month. In 2014, data suggested that of users who had Tweeted, 43% hadn’t Tweeted in the last year, and 44% all users had never Tweeted at all.

I can’t help feeling that if these numbers are accurate—and they’re certainly supported by anecdotal evidence—Twitter falls short of achieving its mission. For now, it seems, they’re enabling a minority of their users to broadcast to the majority.

In public appearances, Facebook has made a much more deliberate approach at measuring and achieving its mission. First and foremost, it actually changed its mission. For years, the company’s focus was making the world more “open and connected”; now Facebook wants to build community and “bring the world closer together.”

As with Twitter, I don’t the complete data necessary to evaluate Facebook against its mission. At the very least, though, I have evidence that Facebook IS measuring things beyond clicks, engagement, and profit. Here’s a recent survey I received while using the platform: 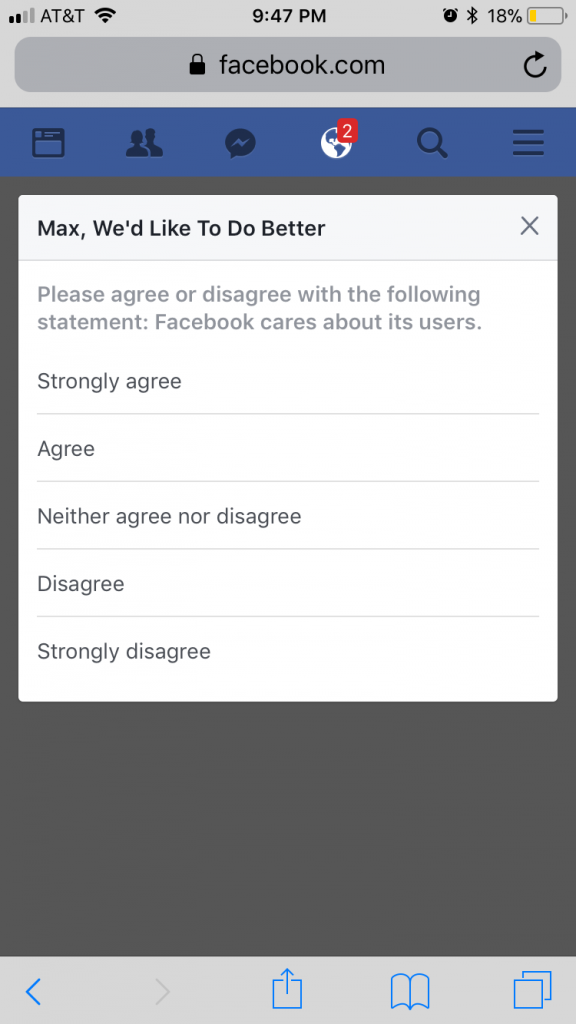 It’s just a single likert scale question, but very specifically focused on user feelings. I’m not suggesting that Facebook is achieving its mission just because it asked me this question. But I think the way Facebook asked the question is an example of how we might measure mission. It wasn’t a user experience question, nor a question to increase profitability. If you’re cynical, you might suggest it was a PR question. But to me, it was a sincere question about how Facebook is doing–whether they’ve strayed too far from their mission.

I worry about this essay because I don’t know that I’ve offered breakthrough analysis of any kind. Instead, I’m suggesting a simple idea, that the millions of meaningful moments that occur across the web every second should be counted, beyond the financial ROI they provide to a business. But if you’ve considered the topic, I’d love to hear your thoughts about how you approach measuring “mission.”

A Wild Future Technology That's Closer Than You Think