Every once in a while, you might put on a piece of clothing that you’ve recently purchased from the store and find a small sticker on the inside of the fabric. It’s usually a small circle with a number on it, that looks something like this:

You probably know that the “QC” stands for “quality control” and the number refers to a specific individual who personally inspected your piece of clothing at the manufacturer. The quality control process is a very important step in the manufacturing of many products, especially foods, like meat or eggs, that have the potential to spread harmful bacteria and diseases. “Quality control” also refers to the process of teaching and training new employees to make sure items are produced efficiently and no accidents occur.

Quality control came about naturally as part of the manufacturing process; as companies tried to stay competitive by producing high quality products, it made sense to monitor production to ensure the highest standards. We usually take quality control for granted because it happens behind the scenes. But the next time you stop by a Krispy Kreme donut restaurant, where you can watch golden pastries make their way along a conveyor belt toward a shower of sugary glaze, look for workers that are throwing out the uncooked or poorly formed donuts. Krispy Kreme has stringent standards of quality for their donuts; everything is precisely calculated, from color and shape to taste and texture. And they’ve perfected the quality control process. After all, the company promises “Impeccable presentation…wherever Krispy Kreme is sold.” 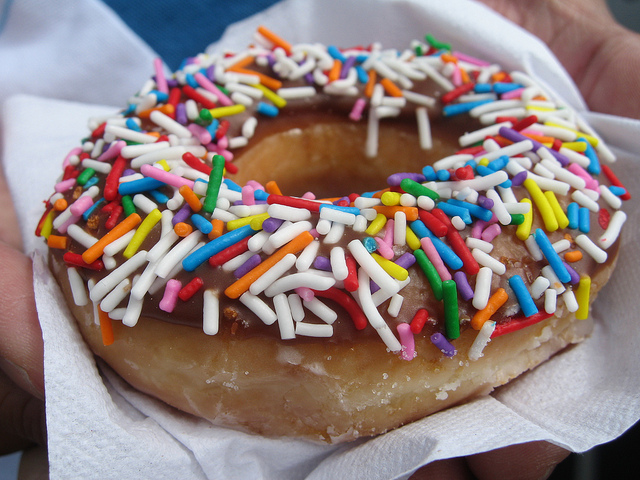 Implement Your Own Quality Control

His advice makes sense: How can you take action and improve if you have no standard to compare yourself against? The easiest way to create a standard for your personal habits is to measure or track your progress. Measure how your habit is going to establish a standard, then continue to compare yourself against that standard. Before you dismiss this as too much work, allow me to introduce you to the simplest method I know for tracking your habit progress; it’s called the Seinfeld Principle.

Several years ago, a story about comedian Jerry Seinfeld became popular because of a simple suggestion that he offered to a young comedian. [Editor’s note: Jerry Seinfeld has since denied that this story took place. I’ve kept the story in place here to illustrate the principle.] In fact, the story became so popular that Seinfeld’s advice is now commonly referred to as the “Seinfeld Principle.” Here’s the encounter as told by the young comedian who spoke with Jerry:

He told me to get a big wall calendar that has a whole year on one page and hang it on a prominent wall. The next step was to get a big red magic marker. He said for each day that I do my task of writing [a joke], I get to put a big red X over that day. “After a few days you’ll have a chain. Just keep at it and the chain will grow longer every day. You’ll like seeing that chain, especially when you get a few weeks under your belt. Your only job next is to not break the chain.”

“Don’t break the chain,” he said again for emphasis.

You’ve probably heard this idea before in other forms and maybe you’ve even tried it yourself. It’s as simple as marking each day that you succeed with the habit you’re developing until you have a streak (or chain, as Jerry calls it) of consecutive days. The secret behind this method is that once you have a streak, it acts as a motivating force for you to contine the habit. After all the effort you’ve put in, you wouldn’t want to break the streak, would you?

The streak method, or Seinfeld Principle, is especially useful for turning simple behaviors into habits. It works well if you’re trying to write a joke every day or get back to flossing your teeth regularly. I highly recommend measuring a goal this way if you’re tackling a fairly easy behavior. In fact, I used this method to create a flossing streak that lasted for over a year! But it does deserve a word of caution, as it isn’t always the best method for tracking behaviors.

When Not to “Streak”

For significant life changes in particular, tracking a streak isn’t the best method for creating a habit. Here’s why: By tracking a streak, you only have two outcomes each day, success or failure. You can achieve your desired behavior to continue the streak, or fail to achieve your behavior and break the streak. Unfortunately, that leaves no room for leniency in the behavior change process. When you focus on a streak of success, you overlook the fact that setbacks are a natural part of the the process of creating a new habit.

As an example, let’s take what is arguably the number one life change that people want to make: losing weight. In order to lose weight, maybe you decide that you will completely eliminate sugary soda from your diet. You’ve been addicted to Coke for a long time, so quitting all at once is a big change in your life. You use the Seinfeld Principle and every day that you go without soda you make a big X on a calendar. However, eventually you have a stressful day at work, and to console yourself in the evening you go to dinner and order a large glass of Coke. And what happens next is even worse–you feel so guilty about giving in and breaking your streak, you resort to old habits to console yourself further. You may even give up on your new Coke-free lifestyle altogether.

The incident that I just described is so common that it has an actual psychological diagnosis–it’s called the “Abstinence Violation Effect.” In short, it’s the guilt or shame that we feel after we’ve succeeded with a good behavior for a long time but eventually give in to temptation. The term is frequently used for drug and alcohal rehabilitation (i.e. a person gives in to drug use after an extended period staying clean) but the principle certainly applies to other habits as well. When you’re trying to make a serious behavior change, you can’t expect to succeed all at once. Occasional setbacks are a normal part of the process of developing new habits, so you’ll want to measure your progress using a method that takes this into consideration.

There’s no doubt that measuring your performance will help you improve. If you add some simple quality control to the good habits you do each day, you’ll immediately begin to see results. For an easy tracking method, try out Seinfeld’s well known streak principle and see how long you can make the chain. But remember–the streak method can have negative implications when you use it for complex behavior change.

Author’s note: Make sure to read next week’s post about other methods of measuring habits.