If you spend enough time learning about habits, behavior change, and psychology, you quickly realize that there’s much more information than you could possibly implement in your life. There are hundreds of theories, models, and studies; often what seems like a basic principle has a vast library of research behind it. But the truth is that often you can dramatically change your life by applying just one or two simple strategies. So–if you could only choose one strategy from all the mountains of psychological data, what should you choose to have the biggest impact?

Let’s answer that question with–you guessed it–a research study. In 2008, Kaiser Permanente published new research about weight loss based on a study with nearly 1,700 participants. It was a fairly straightforward weight loss study: some participants tried weight loss strategies while others did not, then the results from the two groups were compared. When the study was complete, one weight loss strategy in particular proved to be extremely effective: keeping a daily food record. The lead author from Kaiser Permanente, Jack Hollis, said, “Those who kept daily food records lost twice as much weight as those who kept no records. It seems that the simple act of writing down what you eat encourages people to consume fewer calories.”

That’s right–the participants who kept daily food records lost TWICE as much weight. If you could only choose one strategy to change your habits, and you wanted to start with something simple, tracking your behavior seems like the obvious choice. In a previous essay, I discussed an incredibly easy way to track your behavior (the streak method). Today, I’ll take a closer look at how you can gather important data about your habits but still keep things simple.

Living by the Streak

If you’re tracking a particular behavior over time, the simplest method might be to track a streak. Just track each day that you succeed with your behavior and see how many consecutive days you can do it. However, when you’re trying to change deeply ingrained behaviors, that method of tracking isn’t enough. Here’s why: failure is a natural part of the change process. And sometimes we fail more than we succeed! When you fail often, trying to create a streak is almost demoralizing, and you don’t end up with useful information to help you change. There are plenty of examples to illustrate this idea, so I’ll just use my favorite, professional basketball.

Have you ever considered that in basketball failure is actually MORE common than success? Think about it. During a normal basketball game, most teams miss many more shots than they make. In fact, in the last ten years, only one team in the National Basketball Association successfully made more than 50% of the shots that they took for a whole season. (It was the Phoenix Suns in 2008.) Imagine if a basketball team tried to apply the streak method to improve the players’ shooting ability. The coach might say, “Hey guys, what we really need is to make a LOT of shots in a row. If we can get a streak going, I just know we’ll win more games.” Eventually the team might have a few long streaks of shots made in a row, but they would also have long streaks of misses. Plus, it would be impossible to measure real progress over the course of the whole season. After a long streak ended, there would be no way to know whether the streak was a result of improved shooting or whether it was simply the result of the random probability of shooting a basketball.

When you’re trying to adjust a complex behavior, like shooting a basketball, the streak method is laughable. Instead of tracking a streak, you need to track information about your behavior that will actually lead to improvement. To illustrate this, I’ll offer two examples from well-known NBA players.

Karl “The Mailman” Malone is in the basketball Hall of Fame and is one of the greatest NBA players ever. He earned his nickname, The Mailman, because he always delivered. But when he came to the NBA, he was a terrible free throw shooter. Free throws are the easiest shots in the game, aside from dunks or layups close to the basket. On a free throw, you shoot from the same exact location on the court every time (which makes it easy to train for the shot), you don’t have any defenders trying to prevent your shot, and you have plenty of time to relax and focus on your training. Free throws should be second nature for an NBA player.

Luckily, Malone was able to measure his performance by tracking the frequency of his made free throws. It’s easy to calculate how many free throws he shot during the whole season, and how many of those free throws that he successfully made. During his first season, he made just 48.1% of his free throws (the average for an NBA player makes about 75%). But if you look at his free throw shooting percentage over the next several seasons, it’s clear that he spent a lot of time in the gym working on his shot. By his fourth season, he made 76% of his free throws, which put him above average. He continued to improve and toward the end of his career he had three consecutive seasons of 79% free throws made–not bad for a guy who started out making fewer than 50%.

If Karl Malone had attempted to measure progress by the length of his most recent streak, he never would have really been able to know whether he was improving. Even when he was a poor free throw shooter, making just 48% of his shots, I’m sure he had some streaks. Instead, by measuring how frequently he made shots (his shooting percentage or success rate) it was easy to see significant improvement.

The best basketball player in the world right now (and a guaranteed Hall of Famer) is LeBron James. When LeBron came to the NBA, he was already already pretty good at free throws–he made an average of 75%. You could say that LeBron had already developed his free throw shooting to a consistent level–so how could he improve?

Instead of focusing on his free throws, where his practice would likely yield diminishing returns, LeBron focused on his regular in-game shots. And rather than only focusing on his percentage (how many he made and missed), he began to focus on where he was when he made or missed those shots. By paying close attention to his shooting percentage AND where he was on the court when he shot the ball, LeBron has been able to improve his shooting percentage every year for nine out of 10 seasons.

The Importance of Tracking

In the examples of Karl Malone and LeBron James, it’s pretty clear that certain information was necessary for them to improve. The simple streak method would not have worked on its own. They used specific measurements: success rate (frequency of successes) and location (quality of shots) to make major improvements. If you’re going to track a behavior, these are two good variables to focus on: frequency and quality. When you track these two things, you’ll be able to answer the key questons about your behavior: How often am I doing it? and How well am I doing it? 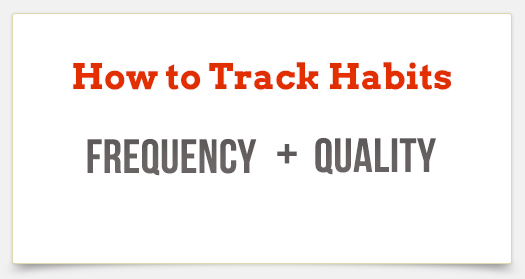 Here’s a specific example of how you would track a behavior, like exercising for 30 minutes every day. Each day you exercise, you mark that day on a chart (similar to the streak method) but instead of an X, you use a simple scale to rate how well you did. Put a 3 for “Yes, I did it,” a 2 for “Yes, but I cheated a little,” and a 1 for “No, I didn’t exercise.” At the end of each week or month, you can calculate your success rate. Out of thirty days in a month, how many did you rate a 2 or a 3? That’s your success rate. After several months, you’ll have very valuable information. Has your frequency improved from one month to the next? Have you started to score more 3s than 2s and 1s? By focusing on frequency and quality, you can actually measure performance instead of just a simple streak on its own. You may remember that in the Kaiser Permanente weight loss study, there were no 1s, 2s, or 3s–just food diaries. But in that example, participants still captured the important information: 1) frequency — how often am I eating? and 2) quality — how well am I doing it? This goes to show that you don’t necessarily need to “rate” your performance, as long as your tracking information that will help you see how well you’re doing.

Tracking your behavior may very well be the easiest way to improve your behavior. Keep things simple by emphasizing frequency (how often am I doing it?) and quality (how well am I doing it?) as the basic measurements of your performance. If it doesn’t help you become a Hall of Fame basketball player, at the very least it may help you create some new positive habits.